Keratokonus is a progressive disease characterized by an irregular thinning and bulging of the cornea. Since the quality and regularity of the cornea is vital for good vision, keratoconus leads to an increasing loss of vision. The cornea is the most important optical component of the eye as it is responsible for 2/3 of the total refraction. Even slight changes in the geometry of the cornea can significantly inhibit the visual function of the eye. Usually, keratoconus cannot be detected in clinical examinations without the help of additional check-ups (topography, pentacam, etc.). One of the first indications of a possible case of keratoconus is a vision that cannot be corrected 100% with visual aids (e.g. glasses) anymore. Other diseases, which might also lead to such a vision loss (e.g. amblyopia, cataract, glaucoma), do, however, have to be ruled out. Frequently, hard contact lenses can help in the early stages of keratoconus.

In a normal eye of zero dioptres, the focal point is located on the retina (similar to a film inside a camera) and the eye sees precisely without further optical aids. In "normal" eyes suffering from myopia (shortsightedness) and hyperopia (farsightedness), the eye is either "too long" or "too short". In these cases, the focal point is present, but located either in front or behind the retina, causing a blurred image without optical aids. Consequently, glasses are necessary to move the focal point on the retina in order to allow for a sharp imaging of the object. This is not the case in keratoconus, where the irregularily shaped cornea inhibits the creation of a single focal point.

optics of a normal cornea 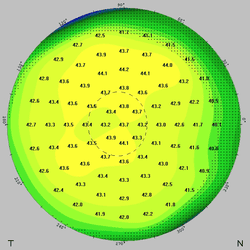 topography of a normal cornea

The situation is totally different in eyes suffering from keratoconus. The cornea is irregularly shaped to an extent that the incoming light-rays cannot be focused on one single focal point anymore. Consequently, a sharp imaging of objects is not possible in this eye. As there is no proper focal point, even glasses fail to create a sharp image on the retina. At a certain stage of the disease, the vision is always blurred, with or without glasses.

The illustration on the left shows what a keratoconic cornea with an irregular curvature looks like. The irregular bulging causes a loss of focal point. A sharp imaging is not possible anymore. The right picture shows a typical topography of a keratoconic eye. In this illustration, the irregular and inhomogeneous curvature is colour coded as well. The steeper areas range from red to purple, whereas the flatter ones are green. 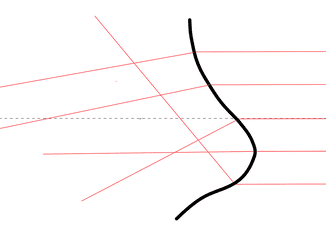 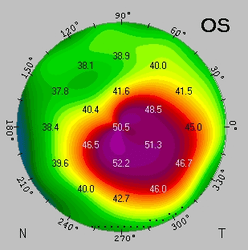 topography of a keratoconic eye

The irregular corneal structure explained above is created by the following process: On an ultrastructural level, the system of collagen fibrils, which represents the static elements of the cornea, is destroyed (Daxer A. and Fratzl P. Collagen fibril orientation in the human corneal stroma and its implications in keratoconus. Invest Ophthalmol Vis Sci 1997; 38:121-129). The left image shows the orthogonally regular arrangement of the collagen fibrils inside a normal cornea. In keratoconus, the collagen fibrils are degraded and dissolved and the regular arrangement of the lamellar structure, which is the basis of the intact corneal biomechanics, is destroyed (illustration on the right). Consequently, a thinning of the cornea takes places. As a result, the elastic tensions within the cornea increase which, in addition, might add to the progression of the degenerative process. 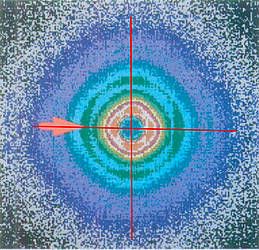 collagen arrangement in a normal cornea

collagen arrangement in a keratoconic eye 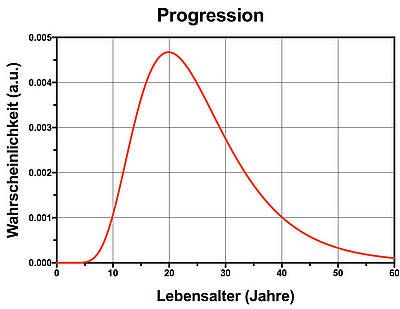 Keratoconus is a mainly genetically caused disease. In Europe and North America, the disease seems to appear sporadically and approximately one out of 1000-2000 inhabitants suffers from keratoconus. However, there are also so-called endemic regions, where the disease is diagnosed more frequently. One such endemic region could, for example, be a mountain valley, which was more or less isolated from the rest of the region for generations. The same applies to islands and other isolated areas of settlement where, based on a decrease of the gene pool, the probability of genetically caused diseases increases accordingly. Furthermore, there are cultural factors which require consideration. In some regions, such as the Middle East, where, traditionally, weddings among relatives are more common than in Europe and North America, keratoconus is diagnosed more frequently. Thus, there are regions in the Middle East where up to 10% of the local population suffer from keratoconus. In addition to a genetic origin, other factors like eye-rubbing are accused to be causative.

In Europe, keratoconus mostly occurs in patients at around 20 years of age (generally between 16 and 25 years of age). However, more aggressive types of the disease, which affect children under the age of 15, exist.

Keratoconus is a progressive disease. This means that the disease is characterized by a continuous decrease of visual acuity. The probability of progression depends on the patient's age. Usually, the following rule applies: the older the patient, the less likely the disease is going to progress. However, there are exceptions. There are, for example, patients aged 40 who, even after crosslinking, still suffer from a progression of the disease. A regular medical examination performed by an ophthalmologist is, thus, absolutely necessary.

Given its genetic origin, the disease always affects both eyes. However, it is possible that, clinically, it only shows on one side. The eye which does not show the effects of keratoconus, is referred to as “forme fruste”.

Initially, patients often observe a rather frequent change of the power of their glasses and double contours. Usually, keratoconus is diagnosed based on the atypical topographic pattern.

The offered information on this website is not addressed to children and persons below the age of 16.

To withdraw your consent or to restrict cookies, you have particularly the following possibilities:

Cookies that are set for marketing and analysis purposes usually are stored longer than for the particular session; the precise storage time can be learned from the guidelines of the respective providers.

Additional information about the utilization of personal data in connection with the usage of this website can be found in our Data Protection Guidelines in accordance with Art 13 GDPR.